Exploring Microservices Architecture: What You Need to Know

Microservice Architecture (a.k.a. “Microservices”) is a method of developing software focused on building single-function modules. The term was coined in 2011 and the microservice approach quickly gained steam near the end of 2013:

The advancement of microservices was driven, in part, by tech giants like Netflix, Amazon, Twitter, Google, and Uber evangelizing its benefits.

What’s all the microservice buzz about?

Why is anyone interested in microservices? To answer that question we need to briefly explore the evolution of software architecture.

Not long ago, most software was “monolithic.” A monolithic design means the user interface and the data access code are combined into a single, self-contained program.

Monolithic software design comes with some downsides. Most notably, because of the self-contained, interdependent nature of monoliths, a failure anywhere in a program can cause the whole application to come crashing down. And, there are other issues:

To overcome these problems, a Service Oriented Architecture (SOA) was introduced and became popular in the early and mid-2000s. The SOA views an application as a collection of services running in parallel and connected by application programming interfaces (APIs). Each service is self-contained and represents a specific business activity with a desired outcome.

This approach helps solve many of the downsides inherent to monolithic software designs:

The Microservice Architecture (MSA) is a variant of SOA. In fact, some people argue that MSA and SOA are not really different things at all, so the term “microservices” is superfluous. Nevertheless, the term seems to be here to stay.

According to Jerry Andrews, when people talk about MSA they’re generally referring to software design that includes these characteristics:

There is some debate on the exact definition and some would argue with aspects of the defining characteristics repeated here.

SOA and MSA are also differentiated by how granular services are: 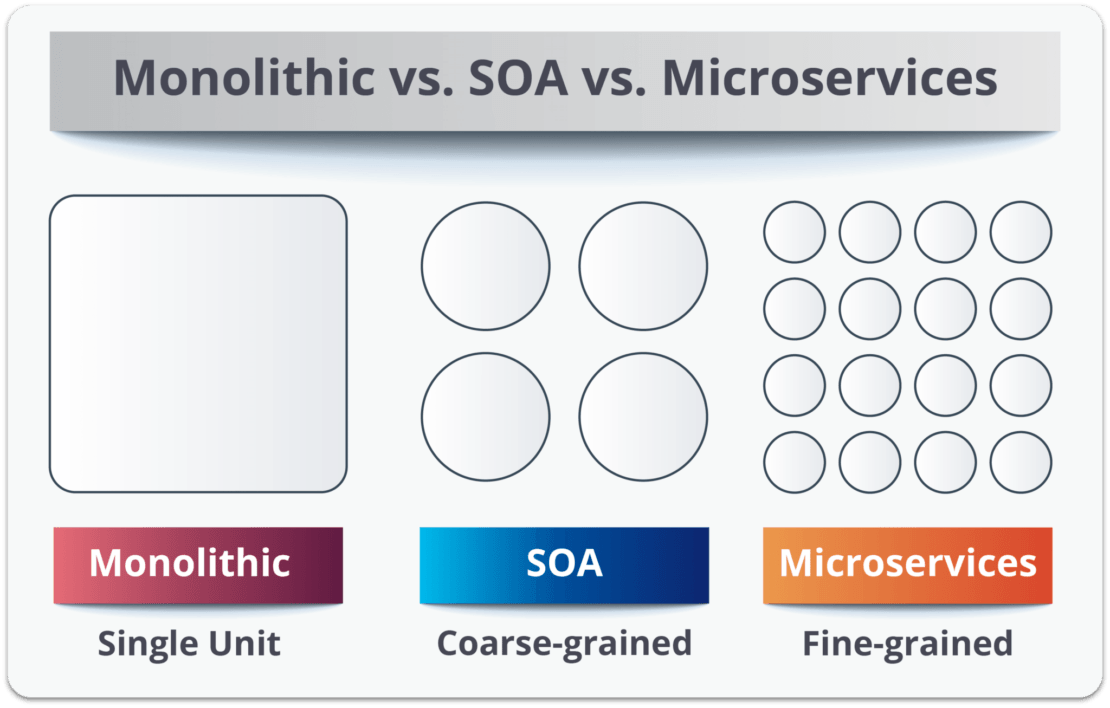 There are also differences in how individual services are conceptualized. SOAs view services through distinct lenses:

In contrast, MSA views services purely as functional (without viewing them through the separate lenses SOA does). Microservices might be created for discrete functional services like:

When learning about microservice architecture there is often some confusion on how it’s different than an API endpoint. The clearest way to express the difference between these two terms is to point out that an API is about communication and a microservice is about how the software is organized.

A microservice may leverage APIs to allow different services to interact but the term refers specifically to how an application is divided up.

If the difference between an API and MSA is still unclear, here’s a great video from IBM that explores the differences in more depth:

The self-contained nature of individual microservices introduces a variety of benefits:

The downsides of microservices

While many companies are refactoring their monoliths in favor of a microservices approach, microservices aren’t always the right answer. It’s not the one true perfect way to design an application that everyone should always use. In many cases, the upsides of MSA outweigh the downsides, but sometimes not because:

Moving from monolith to microservices

Many applications begin their lives as monoliths, but as they mature bottlenecks that should be split out into microservices become apparent. This refactoring process is known as “breaking up the monolith.” The two architecture approaches are not an “either-or” thing or a “right or wrong” thing— many popular apps are a monolith-microservices hybrid.

While microservices offer distinct advantages over monoliths, building software from scratch as a monolith and then moving toward a microservice approach may sometimes make more sense:

If development time is a non-issue, taking a microservices approach from the beginning avoids the effort and expense of later refactoring. You could weigh the pros and cons of absorbing the time costs of starting with microservices versus delaying those costs and beginning with a monolith. The right answer will depend on the priorities of the company and its project.