For quite a few years AWS had little competition in the cloud provider space. Today, that’s no longer true. Oracle, Microsoft, Alibaba, Google, and other heavy-hitters have entered the market and each of their cloud solutions has unique strengths and weaknesses.

The competition between cloud providers is great for end users. Ultimately we get better technology at better prices. But, if you’re comparing cloud providers today, you’ll probably find it challenging to make a choice on which solution is best for your needs.

As competition increases, each provider strives to match the strengths of competing solutions and overcome their weaknesses. This means there’s an ever-narrowing gap between what makes cloud solution’s unique and this can make it increasingly difficult to identify the cloud that’s the best match for your project.

In this post we’ll do an in-depth comparison of two popular public cloud solutions: Amazon Web Services (AWS) and Google Cloud Platform (GCP). I’ve tried to be fair and unbiased on the strengths and weaknesses of each solution but you should know upfront that here at Pagely we are an AWS Advanced tier partner. Both our managed WordPress hosting solution and our serverless solution are built on AWS. It’s the cloud we trust and I hope to clearly explain why in this post while still remaining fair to GCP.

Comparing AWS vs Google Cloud in 2019

Just a few years ago, you could say that AWS was bigger and far more feature-rich but Google Cloud Platform was priced lower and the services they did offer were solid enough so, if they met your needs, they were a strong contender. It was simple and straightforward to summarize how things were at that point in time. Today, halfway through 2019, the lines are less clear so it’s no longer easy to boil the differences down to a single sentence.

So, for you, the person doing research on public cloud options, this rapidly developing competitive landscape presents another challenge. A comparison article from 3, 2, or even 1 year ago no longer captures the current situation. Things are changing that fast. We’ll try to keep this article up-to-date as both clouds advance.

Jeff Bezos said it well, “AWS had the unusual advantage of a seven-year head start before facing like-minded competition. As a result, the AWS services are by far the most evolved and most functionality-rich.”

With that generous head start AWS has built an incredibly well-rounded solution while establishing a strong reputation for performance, reliability, and security. AWS has been, and continues to be, the bar all other clouds are measured against.

The fact that AWS was the first to market, alone, does not necessarily make them a better solution. But, it does mean that they’ve had more time to develop and refine their cloud offerings. With something as rapidly evolving as cloud technology, this is a tremendous advantage. Their platform is more mature. They offer far more services (200 + versus ~ 50 for GCP). Those services have more options and offer more functionality. Everyone else is just trying to catch up at this point.

In general, you can’t go wrong with AWS. If you’re a startup pitching potential investors and you tell them your solution is built on AWS, no one blinks an eye. It’s a safe bet and a time-tested, proven solution. But that doesn’t mean it’s always the best option for every situation and in this post I’ll point out specific situations where GCP may be the better option.

If anyone can compete with an entrenched market leader like AWS, Google is in a good position. They have a strong brand, global infrastructure, and many users of their office suite of tools (Gmail, Drive, Docs, Sheets, etc.).

Their emphasis on affordability (they were the first cloud solution to provide to-the-minute billing and they offer increasing discounts as you use more resources), security, and performance have allowed them to continue growing even as AWS’s marketshare has also increased year over year.

While some companies may be hesitant to trust their sensitive data to Google given its privacy issues, Google explicitly states your Google Cloud Platform data is not used for advertising purposes and there are no backdoors for government agencies. 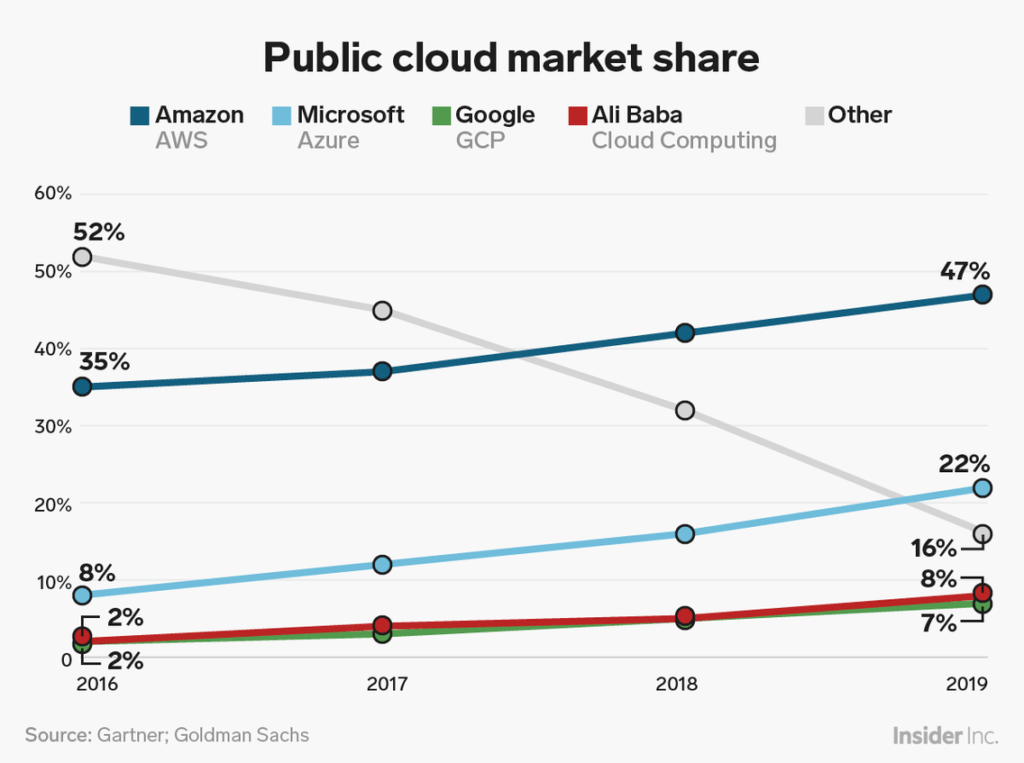 Market share trends don’t say much about which cloud solution is best but they indicate changes in consumer choices that reflect a shifting competitive landscape caused by stronger product offerings or pricing strategies. It can be useful to see where things are at and try to understand why.

In this case, we see AWS is the 800 pound gorilla every new competitor is gunning for. AWS’s marketshare is greater than the next three competitors combined and it’s almost 7x Google’s. In spite of the increasing competition, AWS’s marketshare continues to grow as the top four cloud solutions take marketshare from the multiple smaller providers that make up the “Other” category.

In the years ahead as the “Other” category continues to grow smaller, we’ll probably start to see more direct competition between the major players. It will be interesting to see how that plays out as things heat up.

The core components of a cloud solution are compute and storage resources so we’ll cover those options from both providers and then compare the important higher-level points of comparison like network coverage, security, and pricing.

Google’s Cloud Compute does offer a variety of customization options for their instances so boiling the comparison down to the standard configurations is misleading. More than likely, on either platform, you’ll be able to find an instance that matches your project’s needs so, while this is a popular point of comparison, it probably isn’t a notable difference for most situations.

Storage options are similarly priced and offer relatively similar options at this point. It can be helpful to divide these services as hot storage, cool storage, and cold storage.

While minute differences between these storage options exist, they’re unlikely to be a deciding factor in which cloud solution is best so I won’t waste time picking those minor differences apart. 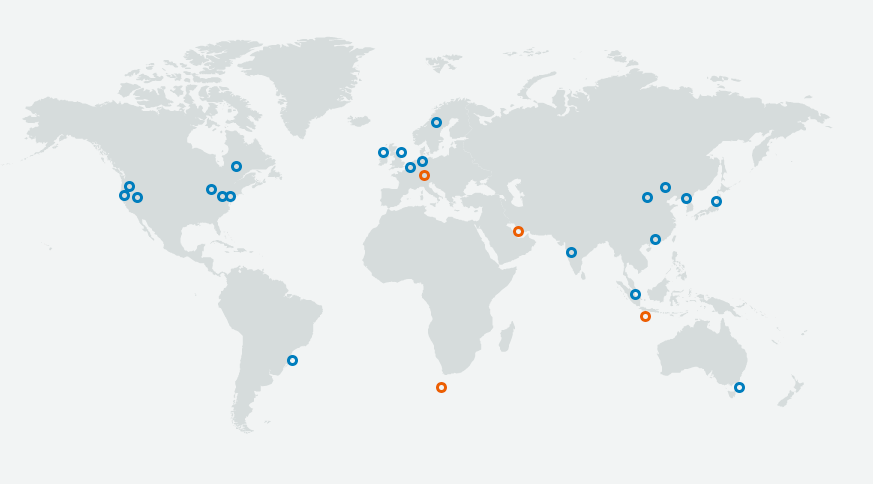 If those two maps look remarkably similar to you, you’re not alone. AWS does maintain an edge but that edge is becoming smaller as Google aggressively tries to match AWS’s coverage: 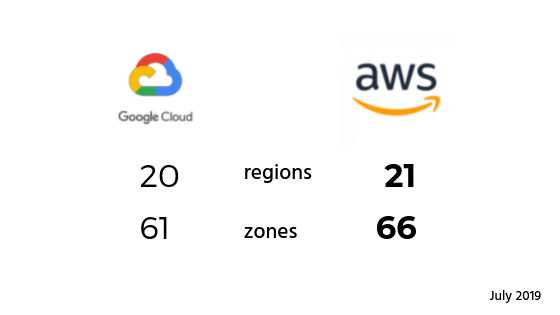 A region is a specific geographic location where you can host resources. On their websites, AWS has coverage in 21 regions versus Google’s 20.

Regions are divided into zones. Most regions have 3 or more zones. AWS has 66 zones and Google has 61 zones with 12 more coming soon.

It’s safe to assume that in the not too distant future, we’ll see all major providers with basically the same global coverage and the differences will become negligible to the point of being moot. For now, AWS wins on this point of comparison. No other public cloud provider has the global coverage they do.

Google Cloud Platform has been touted as the fastest cloud provider. While initially they did seem to have a notable performance advantage over AWS, that gap is closing quickly as AWS optimizes their network. This is a great example of how increasing competition is forcing AWS to stay on their game and address specific concerns of the market.

In recent latency tests on EC2 instances and Cloud Compute instances I conducted from a public internet provider on the southeast coast of the US using Cloud Harmony:

These tests indicate Google Cloud Platform still has a modest latency performance advantage over AWS. Particularly when it comes to services located in Asia, latency is generally lower when pinging GCP.

As AWS continues to tweak and refine their network, we’ll continue seeing a smaller and smaller performance gap here. Until then, GCP wins in the latency category.

Sum of downtime hours from January 2018 to June 2019 as published by AWS and Google: 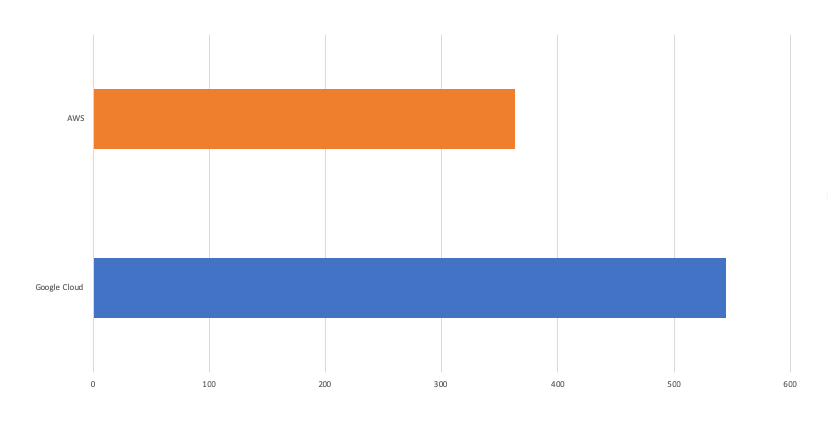 This very recent data indicates that the AWS cloud is more reliable than GCP’s. This is straightforward data so there’s not much commentary needed. But, for most businesses, the importance of having reliable access to their data cannot be overstated. AWS is a clear winner in this category and this is a major reason why they’re trusted by startups, enterprise businesses, and governments alike.

AWS has more security features, compliance certifications, and accreditations than any other cloud provider, including Google Cloud Platform.

In addition, AWS gives fine-grained security control that’s not possible on any other network. An AWS customer could restrict a user to create a database in only a specific region, from 3-5 pm on Monday through Friday, only on a virtual private cloud, and only in an M4 instances with a maximum number of IOPs. GCP simply cannot offer that granular level of security control and permissions.

Both cloud solutions are building security capabilities for their most stringent and demanding customers and all customers benefit from those advances. While AWS does have an edge here, it’d be wrong to imply that the Google Cloud is not also highly secure with similar security credentials. Unless your company has extraordinary security needs, either cloud provider should have adequate security offerings and processes.

Many comparison articles attempt to compare pricing on similar services between AWS and GCP. I’m going to decline to offer such a comparison. Cloud pricing has become too complex, depends on too many factors that are unique to each situation, and each solution offers unique discounting schemes. These factors together make a direct, accurate, apples-to-apples comparison extraordinarily challenging, if not impossible. In the end, it’d probably be misleading and useless.

GCP has traditionally been considered to be the more affordable option. You’ll see this repeated in many older comparisons so I want to be careful to point out that this isn’t as true in 2019 as it has been in years past. AWS has recently become far more aggressive with their pricing and discounting so this advantage applies much less today than it has in years past.

I recommend starting a conversation with both providers to see what they’re willing to offer in terms of discounts. This will give you a better idea of your true costs with each provider.

When you zoom out and look at the big picture, AWS is clearly the better cloud solution at this point in time. They offer far more services with far more features and their network covers more of the globe. They’re more reliable, more secure, and more established. They’re winning in almost every way you can measure a cloud provider and that makes sense considering they had a multi-year headstart.

With the differences between AWS and GCP becoming smaller with time, it’s important that you know exactly what your company needs out of its cloud provider for its project. While AWS is the best overall solution for most companies most of the time, if Google Cloud has a strength that matters for your particular project it may make sense to go that route.