Update 9/2/2015: Sadly I thought we were done with this nonsense. However a new competitor (now the 3rd) has decided to take up this tactic even after we asked them politely to stop. Shame that their $20+ million in VC has done so little for them that they need to ride our coat tails.

So for those of you not familiar with adwords, here is a 1 sentence primer: You can buy ads on “the Google” that users see when they search for something.

We buy focused ads for our business Pagely®. So when a user searches for something related to our product/industry we may want you to see an advert for our service. It’s common practice and is just part of doing business on the internet.

One aspect of buying ads has to do with the trademarked brand name’s used as keyword triggers. There are some rules around using other’s trademarks in advertising that you should read up on, but in the context of “the Google” it’s open season to some extent.

For Example, we cannot use the term WordPress as our ad copy as it is a trademarked term (some how other host’s are able to bypass this), however we can bid on the single search term “WordPress” or on a phrase that contains the word “WordPress” so that our ad will at least show up when a user searches for: “WordPress hosting”. WordPress while trademarked, is also used as a descriptive term like “WordPress plugin”, “Themes for WordPress”, etc., so that is fair use and it’s in line with WP’s trademark policy.

Some SEM’s spend the cash to show their ads when a user searches for a competitor’s brand name or trademark. As an example when you search “namecheap coupon” the ads that show are affiliates of Namecheap and one right there from a primary NameCheap competitor; a GoDaddy affiliate. NameCheap even has to spend the cash to try and own their own brand on the paid results. Great business model for “the Google”, as they rake in the bank with their advertiser friendly trademark policy. 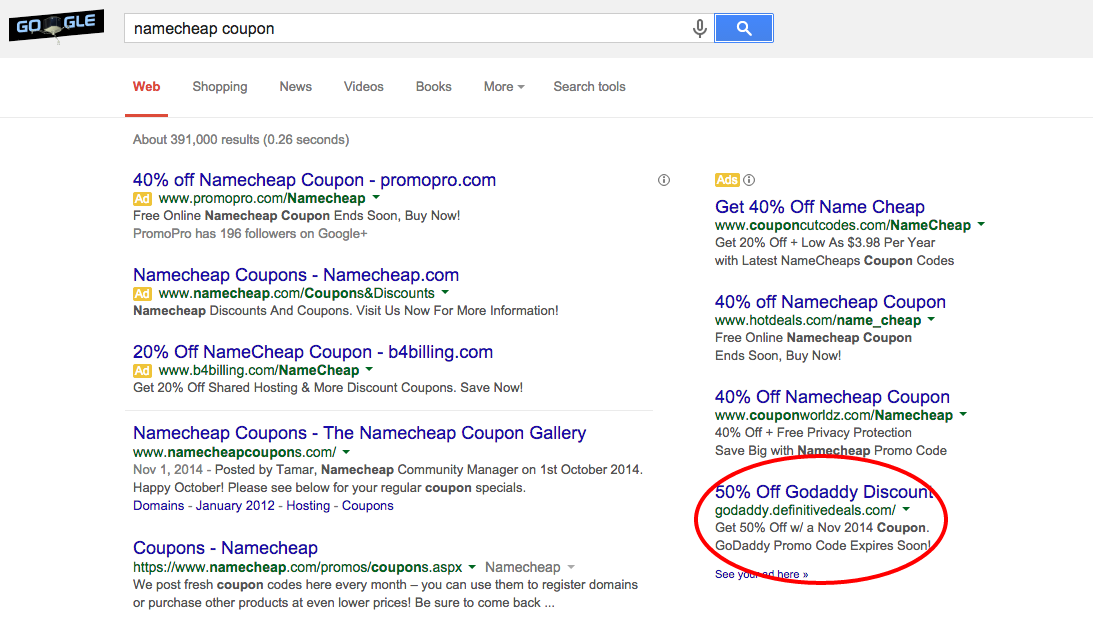 So you may say to yourself, “G’z that is kind of a dick move, the user was clearly searching for NameCheap but a GoDaddy affiliate is there trying to poach that lead, how is that legal?” It’s legal to bid a competitor’s trademark in our free market system under current laws. Unless there is an overt attempt to confuse the customer, there is not much you can do about it.

So what do I do when it happens to me?

Depending on your financial resources or foolhardiness you can do any of the following with varying degrees of success or failure.

So some of us were raised that doing something like this is pretty shady and would put us in a low integrity situation we would not be comfortable with. And some of us were raised to think all is fair in business; it’s a free market, it’s legal, and there is money to made so why would we NOT bid on our competitor’s keywords in an attempt to siphon away their prospects?

Is it really any different then when BMW and AUDI both buy adverts in the same car magazine? Or when taken to extreme target each other in their ads? 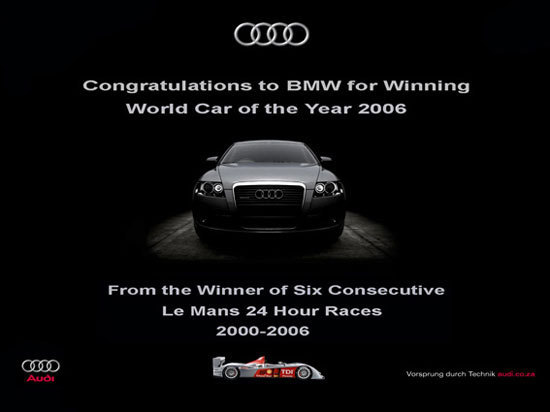 It’s up to each advertiser to determine what’s comfortable for them. So there is no right or wrong here.

On this issue I take the position that we would never bid on a competitor’s trademark as long I control the purse strings at Pagely. It is simply not how we want to do business. I feel the same about kicking sand in a competitor’s face when they are having a bad day. We compete, we position against others, we buy ads for industry relevant terms, we believe in healthy market competition.

When it happened to us.

So when someone did it to us recently we were faced with the same question: What are we going to do about it? We chose to take the logical route to us and reach out to them and appeal to their sense of fair play and request they stop. They obliged within a couple days and took the ads down. In my mind business does not have to be all or nothing, kill or be killed. You can have healthy competition, but be a gentleman/gentlewoman while doing so.

Most of the time. We took the liberty of running a few ads ourselves (only on our trademark of course).

As long as the financial incentive exists to do this, the lowest common denominator will prevail, UNLESS companies actively make the choice not to participate. Some companies have the luxury of making the choice, others have the choice made for them. I would encourage others, at least within the greater WordPress community, to not utilize this practice when buying ads.