Pageviews is a Bogus Billing Metric for WordPress Hosts

Since this is the internet – and the rules of the internet clearly state everyone gets an opinion, I’d like to share one of mine around website hosting billing plans.

Quick backstory: 10+ years ago when we launched Pagely we did so with a simple line on our pricing page denoting a rough estimate of the expected capabilities of that plan ie: Plan – 1 was suitable for ~1 million pageviews. Along came the next several providers who did something similar with one important difference. They actually attempted to measure and cap pageviews per hosting plan, bracketing their plans by this new billing metric.

In my opinion Pageviews used as a billing item is a predatory and anti-consumer practice and you should be very wary of working with any company that applies this #successtax to your monthly bill.

What are you buying when you are buying “hosting”?

To host a WordPress site you need a few key components.

That’s basically it. Hosting providers typically lease/sell you packaged fragments of these resources for a monthly fee. Plan A, Plan B, Plan C. etc. Of course there are other items that may be line-itemed such as included support levels, CDN GB’s per month, managed services, etc. 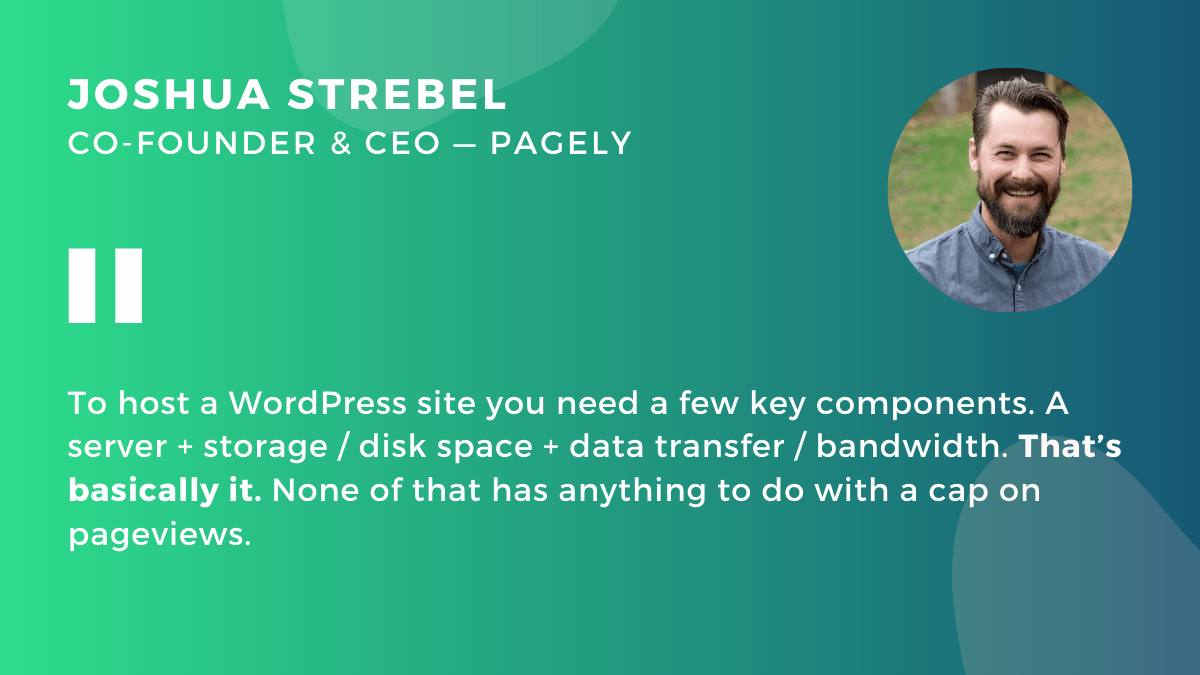 Plan A has X amount of consumables for Z price. It’s all fairly straightforward as most consumers understand what a Gigabyte of Disk space is and can at least grasp that more CPU/RAM offered should equate to more potential performance.

“Pageviews” does not fit this model well – as the definition of a pageview is amorphous and subject to exploitation. Oh, and spoiler alert, PHP workers is not a valid billing metric for WordPress hosts either.

What does an automobile lease have to do with hosting plans?

Pageview limits on hosting plans are akin to annual mileage limits on auto leases. It’s a cap on the use of an asset you already purchased. In an automobile lease context a mileage cap at least has some merit as being a form of controlling the depreciation of the vehicle – you are essentially financing the deprecation of the automobile asset with a lease – and the lease company expects to sell that car (New retail value – Depreciation) when you return it. If the depreciation is too high, they lose money on that transaction as they have to sell it for less than they calculated.

Your hosting plan is not a depreciating asset though – the hosting company is going to sell the same resources to the next customer when you are done for the same or likely higher fee.

Therefore in my humble opinion: Pageviews are just an arbitrary anti-consumer fee – a penalty tax for using the service you already paid for.

A Pageview is (depending on who you ask) a wrapper around these items:

Are you not already paying for these items as part of your hosting plan? Hint: Yes you are.

But wait, there’s more – and my colleague will dig into these more in a future post.

If you want to keep paying twice for the same resources you are welcome to. I simply do not think that is fair.

Our friends down in Austin have made millions on charging their customers overage fees for exceeding their monthly pageview cap – even to the point having to publicly respond to criticism – only to keep the practice in place.

Reminds me of airline baggage fees and fuel surcharges.

An “online payment convenience fee” when they only accept payments online.