Pagely buys domains Dog.ly and Cat.ly to create a WordPress Service for Pets

PHOENIX–(BUSINESS WIRE)–Apr 1, 2011–Pagely today announced major changes to its back-end interface, in an effort to satiate the underserved pet blogging market. With so many rabid pet owners opening Twitter accounts, creating Facebook pages and even writing blogs, a solution was needed to take some of the pressure off. 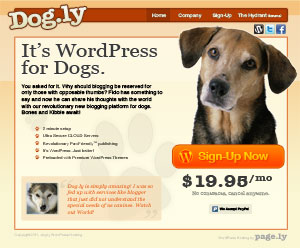 “Dogs have always had it rough when it comes to expressing themselves online,” Joshua Strebel, Pagely co-founder said. “And not every cat appreciates the whole lolcats phenomenon.”

Industry analysts at first questioned Pagely’s ability to raise enough cash to fund the transition, but Pagely co-founder Sally Strebel provided funds from her private holdings. When asked how the money was raised, Sally revealed that she is a successful self-published author, with a series of books about a foreign-born aristocrat falling for a rogue-ish, scruffy haired local boy.

The new interface has yet to be announced, but Josh promises it will be “roll on the ground good” and “tummy-rub easy.”

This marks the first major interface change for Pagely, who had previously used the standard WordPress dashboard.

“We weren’t planning on selling, but Pagely overwhelmed us with their offer,” former cat.ly and dog.ly domain owners said, just before posting an extremely cute pic of a dog and cat playing with a ball of string. “We’re going to stay on to help with the backend design, as the lack of opposable thumbs forces our clients to use only touch interfaces.”
Major changes to the interface include a new PawFriendly™ editor and translation on the fly, allowing dogs to use their familiar barks and cats to purr incessantly until something appears on the page.

“We’re very proud to finally give dogs and cats a forum where they can express themselves online,” Josh said. “I just hope they don’t shed too much on the desk chairs.”