Are Conversational Interfaces the Future of Websites?

A few years back, I was surprised when I turned on my PlayStation to settle in for a night of marathoning horror movies on Netflix. It wasn’t that they had changed the interface of the platform or anything. Instead, what they did was introduce a chat bot named Max. Does anyone else remember him?

This chat bot was one of the first conversational interfaces I ever encountered and it was mind-blowing at the time. He was funny. He always knew which movie categories to recommend. And he never took (too much) offense whenever I shot down one of his suggestions. He was a fast learner, too!

Fast forward to the present day and it seems like conversational interfaces are everywhere. And you know what? It makes sense.

In Ubisend’s 2016 Mobile Messaging Report, they found that “over 60% of consumers believe businesses should be available, contactable and responsive through messaging applications.” Although online chat apps haven’t quite beat out email or phone calls when it comes to reaching a customer support representative, we’ll soon be there as more and more people learn towards human-to-screen conversations.

So, what’s standing in the way from conversational interfaces taking over every website and app? Well, there’s the problem of natural language, for one.

There’s also the matter of developers needing to learn how to properly code these smart interfaces for the web. It’s not a simple task.

Weighing the benefits of conversational interfaces

A conversational interface is one in which a human interacts with a non-human in a way that seems, well, human. The most common iteration you’ll encounter these days is the chat app; something 2.5 billion people currently use and 90% of the global population is expected to adopt by next year. With 35.6 million Americans using voice-activated devices, you’ve also likely encountered AI virtual assistants like Amazon Echo, Google Home, or Siri.

But that’s not where conversational interfaces end. Businesses are now getting into the game as well. Some use Facebook Messenger to conduct business communications. According to Facebook, over 2 billion conversations take place between consumers and businesses every month on their platform (some of which are automated bot conversations while others are manned by actual staff). Outside of that, you also have businesses creating these interfaces for their websites.

What is it about an artificial entity managing your communications that is so appealing for businesses as well as consumers?

As noted above, conversational interfaces like messaging apps are becoming the preferred platform through which consumers can resolve issues without having to speak to an actual customer service representative.

This also means you have to spend less time sitting by the phone, watching your inbox, or monitoring social media, waiting for a customer question or complaint to come through.

This also creates an opportunity for you to shape your business and offering based on what you learn about their needs and preferences.

In general, your goal is to create a website that’s simple to navigate and easy to understand. Nevertheless, there will be visitors who aren’t sure how to find something, how to use your product, or who have general questions about your business.

Until recently, you could direct them to a knowledge base or video tutorials, or you could ask that they submit a support ticket to your team. But with conversational interfaces, they now have a way to get in touch with you quickly.

There’s also the novelty factor to take into consideration. While you have major tech innovators (e.g. Facebook, Google, Amazon) getting in on the chat bot game now, there aren’t too many companies using conversational interfaces on their websites just yet. If you can get in on this now, that buzz alone will definitely increase your profile.

Also, if you’re able to do this right, you’ll likely find your visitors more willing to be loyal to a brand that offers a more engaging, fun, and personal means of communication.

Of course, conversational interfaces aren’t without their flaws. Even a company like Google is struggling with being able to use the technology to its fullest capacity.

When asked about the Google Assistant bot, Fernando Pereira said, “When you try to build a system for understanding natural language, and you don’t have many examples of the kind of understanding you want, then you have to prescribe, you have to write- essentially teach it grammar- so that it can do the understanding. That teaching is very laborious.”

Now, Google has had nearly two decades to gather data on its users’ speech patterns. However, the way we communicate with a search engine (“restaurants near me”) versus how we communicate in a conversation (“got any recommendations for late-night cookie delivery?”) is vastly different. So, Google, like everyone else, is stuck waiting to teach their technology how to communicate with users in a more human and natural way.

Cool examples of conversational interfaces around the web

Despite the stunted growth of conversational interfaces at the moment, there are still some really cool things being done with them online. Again, we might not be able to have full conversations with them just yet, but they are changing the way we interact with the digital world.

Here are some examples: 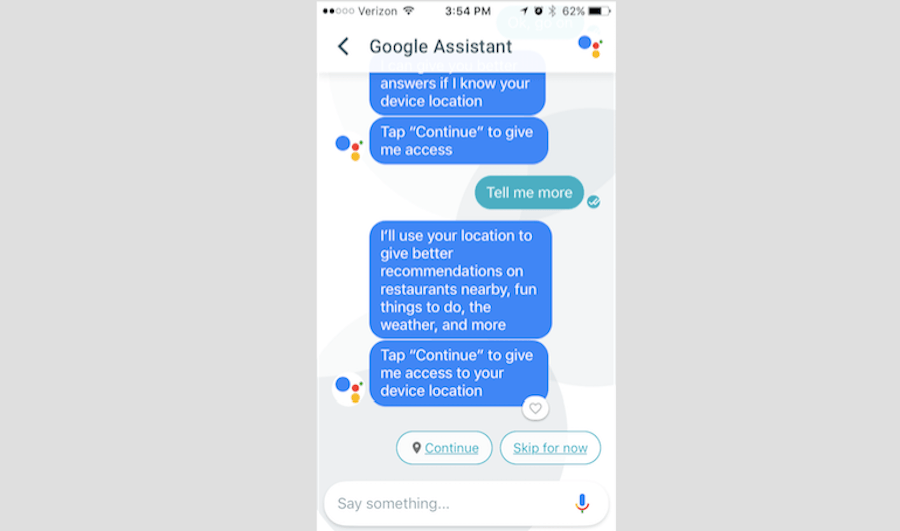 Whether you’re accessing Google Assistant via G-Chat or the Google Allo app, you’ll be able to interact with their smart virtual assistant just like you would your friends, family, and coworkers.

If you’re looking to add this sort of minimal conversational interface to your website, you might want to think about using Holler Box to do so. It’s a simple popup solution, but can help you get that automated messenger up on your site, too. 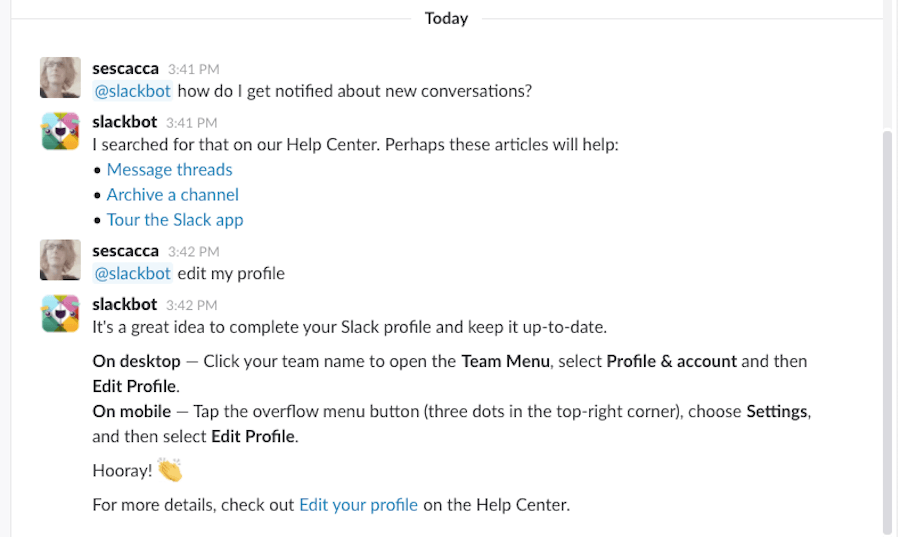 Although Slack is a messaging app that enables you to communicate with friends, coworkers, and so on, you can also communicate with SlackBot as well if you should have a question. Simply message @slackbot for assistance and receive an immediate response. 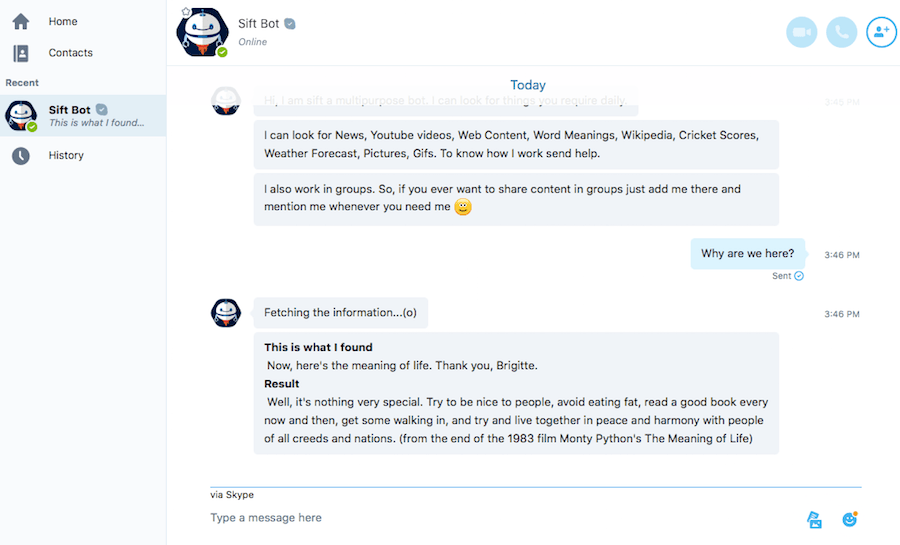 For those of you who use Skype, you might have encountered one of the many helpful bots running around on there. Send them a message the way you would any other contact on your list and wait for a response.

This UX designer has created a conversational interface for the home page of his website. It’s so simply designed and yet it’s hard not to feel sucked in. Perhaps the best part is that he’s provided engaging prompts that help steer you through the prompt in order to learn more about him or get directly in touch.

Do You Speak Human? 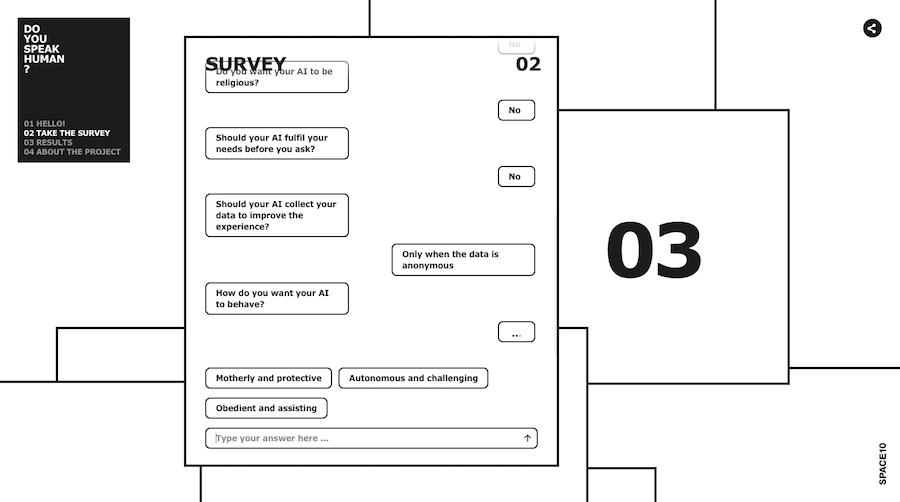 Do You Speak Human? is an online survey designed in the form of a conversational interface. This is SPACE10’s way of collecting information from people to discover more about how they feel about artificial intelligence (AI). Their hope is to use this data to better shape future technology around actual user preferences.

SPACE10 has their own conversational form on their website as well with directions on how to recreate it for your own site: 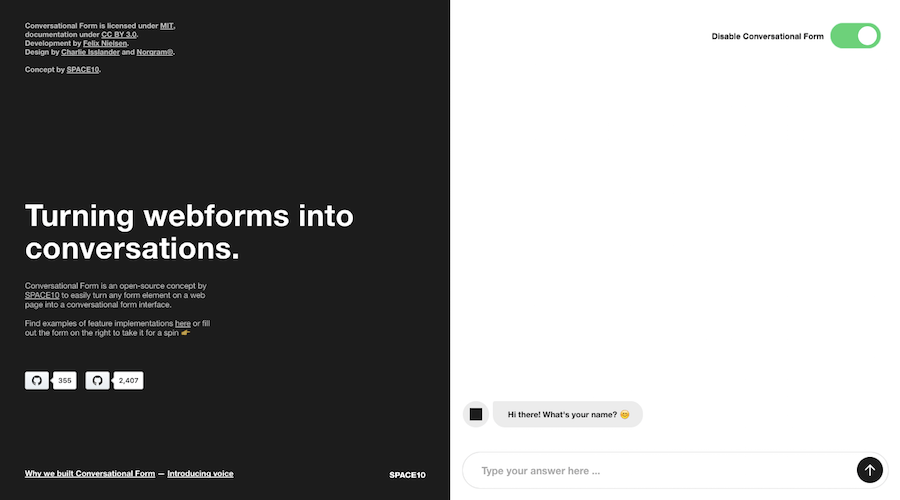 InvisionApp is one of my favorite web design and development tools, so I was excited to see that they created a conversational UI for their Saent app. While it doesn’t currently appear that the app is working, they did learn quite a bit about what users actually want from a conversational interface: 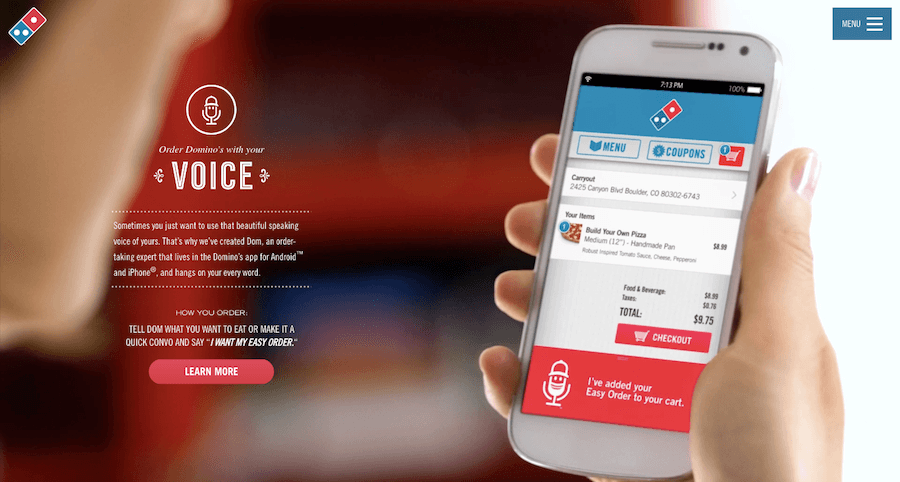 Domino’s has really taken this idea of simplifying communications with customers to new heights. You can order a pizza with an emoji, use their one-click service, and you can even order your pizza from “Dom” (their digital voice assistant).

comScore predicts that, in just a few years, roughly half of all searches people conduct online will be done strictly through voice commands.

Andrew Ng, the chief scientist for Baidu and an associate professor at Stanford, believes that voice conversational interfaces will be the next big thing: “I see speech approaching a point where it could become so reliable that you can just use it and not even think about it.”

Of course, there are also augmented reality (AR) and virtual reality (VR) interactions that are changing the way we communicate with the digital world. It won’t be long before the majority of our interactions with the web take place without having to type out a command through a keyboard.

Looking towards the future

As I think about the proliferation of the Alexas and Facebook Messengers in our daily lives, it’s hard not to imagine that this is what the future of websites will be: conversational interfaces led by AI bots. While I don’t realistically see developers being able to craft entire websites in the style of the conversational interface (nor do I think it’s really practical for the user experience), I do think there are ways to add small touches of this conversational element to WordPress web design.

If your goal is to cut down on the friction that inevitably arises between humans and screens (and humans and other humans), conversational interfaces may be the key to making the on-site experience a more welcoming one for your visitors.