So you want to organize a WordCamp? Read this first

WordPress fans get the opportunity to connect with fellow developers, bloggers, and small business owners at WordCamp events, which take place all around the US, Europe, and the world at large! As of this writing, there have been:

WordCamp Denver recently wrapped up, and it was certainly a WordCamp for the books. For me, it was my third WordCamp attended, my second WordCamp as a speaker, and my first WordCamp as an organizer.

It’s interesting to consider how each of these unique perspectives have shaped the experience of each WordCamp event I’ve attended. Specifically, here’s what it’s like to attend a WordCamp event from an organizer’s perspective.

My first WordCamp event was WordCamp Chicago. I knew a bunch of the organizers (and event regulars), and pushed my way into a speaking spot. I can’t understate how important it is to get to know your local WordPress community if you want a shot at speaking at a WordCamp event.

Attending a local WordPress meetup, or proactively reaching out to organizers well ahead of time (you can find these people on your local WordCamp website), will help you stand out amongst the dozens of applications that will pour in once the call for speakers officially goes live. As an organizer, I can tell you with authority that we had to reject a lot of amazing applicants, including those who have spoken at many WordCamp events. The competition is pretty tough, so do whatever you can to get a leg up!

When I moved to Denver from Chicago, I wasted no time getting to know my local WordPress community. I had a very established professional network in Chicago, and used existing connections with organizations that had chapters in Denver to rapidly rebuild. One of those “organizations” was WordCamp, which led me to reach out to the Denver WordCamp 2017 organizers.

I first met one of the organizers for coffee, who told me there were needs on the organizing team and connected me to the people ultimately in charge of the event. I settled into a role as the website content manager, but of course, that would just be the beginning of my involvement with WordCamp Denver.

If you think a WordCamp event comes together in just a month or two, you’re extremely idealistic. The event’s main organizers were getting things going as early as February this year (for a late August event), and I joined the team around April. They had already been meeting and planning before this, but it’s fair to say that this was around the time that planning started to really pick up.

What happened next would be boring to recount in detail, but essentially broke down as bi-weekly calls until about a month before the event, which is when these calls happened every week. We used Zoom so that everyone could see and interact with each other (a great app for remote workers to stay organized). Each meeting was about an hour, and we would give each person time to catch us up on what they were working on within their area of focus.

At this point, it’s worth mentioning that everyone had a pretty well-defined and specific role. Each person had a role-based on one of the following:

And these were just some of the roles our team members each took charge of.

In terms of a time investment leading up to the event, it might be anything from 1-2 hours per week to over 5. Especially for something like being the website content manager, some weeks there were no updates needed, while other weeks meant building out speaker profiles and coordinating with anyone who hadn’t submitted adequate information. Some roles (like the volunteer wrangler) required relatively minimal effort until much closer to the event, and day of. It all balanced out in the end with team members each helping with other duties as they came up, and as availability allowed.

Regardless of the role, it was back and forth emails with the team and third parties (like speakers or sponsors) that might take up the bulk of your time, in terms of being an organizer. If you’re a fan of batching work, you probably wouldn’t enjoy the sporadic nature of dealing with WordCamp planning! 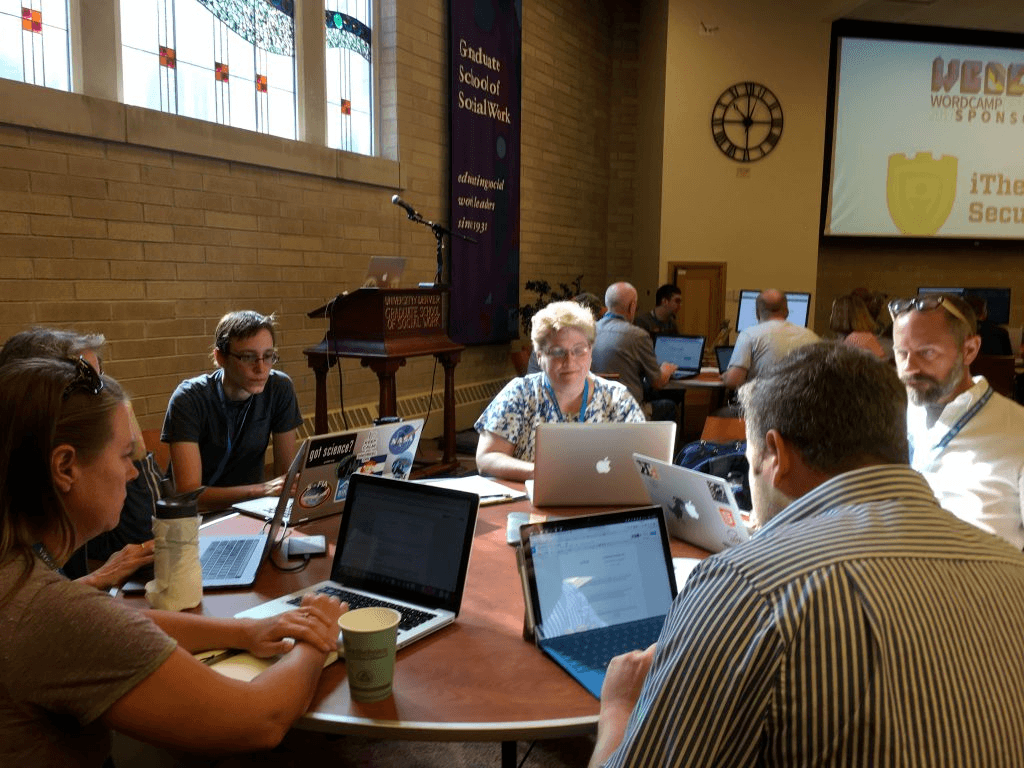 It’s important to note that even though each person took on a specific role, if called to organizers would dip their hands into other roles as needed. For example, when it came time to select speakers, we all put our brains together to determine which topics would fit best within our defined tracks and took it upon yourselves to reach out to additional speakers if necessary to fill a gap in our list of programming.

On the topic of speakers, you might assume that it was easier to become a speaker as an organizer, but that wasn’t necessarily the case. The head organizers of WordCamp Denver didn’t want the event to become all about the organizing team and put a limit as to how many of us could be organizers and speakers. My topic just happened to be one that filled a gap on the schedule. Some of the organizers were a bit upset to discover that being an organizer might actually hurt their chances of speaking at the event, but eventually, it all worked out and nobody left our planning sessions feeling under appreciated.

If there’s a takeaway here, it’s that you need to be on top of your game when suggesting topics as a potential speaker, regardless of if you have an “in” or not. And if you do end up being an organizer, make sure that you can handle ALL of your organizer duties, including helping out the day of, before applying to be a speaker on top of that.

WordCamp Denver Planning: A Month Out

A few weeks before the event, a good number of the organizers actually met in person for the first time. We had a venue walkthrough to get an idea of the space, any additional resources needed, and just to hang out before things would get insane day-of.

Most of the organizers live in Denver or within an hour or so of the city. But some of our organizers would just be coming in for the weekend of the event, from a few hours away or more. It was great for our team culture to meet everyone in person, and since we had been working so closely together, and had already seen each other on Zoom, it was easy to fall in with each organizer as if we were old friends.

The thing about the WordPress community is that everyone is so open and welcoming of their fellow WordPress nerd. Working with WordPress is a badge of honor that we all wear, and once you make friends with other WordPress people, you always have someone to turn to if there’s an issue you just can’t figure out on your own.

By getting involved with WordCamp Denver as an organizer, I’ve built my inner circle of WordPress friends tenfold, thanks to my connections with organizers, speakers, sponsors, and attendees. If you’re a networking superstar, this is the way to have an automatic in with basically anyone attending the event!

Anyways, because we did such a good job with planning ahead of time, there wasn’t a lot to do in crunch time leading up to the event- just dotting our i’s and crossing our t’s, then doing the best we could day-of.

Most WordCamp events actually begin the day before, with a speaker/sponsor dinner to thank everyone who helped make the event possible (including the organizers, of course!). To me, this was one of the best networking opportunities of the event, especially as it was a kind of calm before the storm. Everyone would be busy making the event happen the next day, so this was the best chance to connect with other speakers and sponsors. 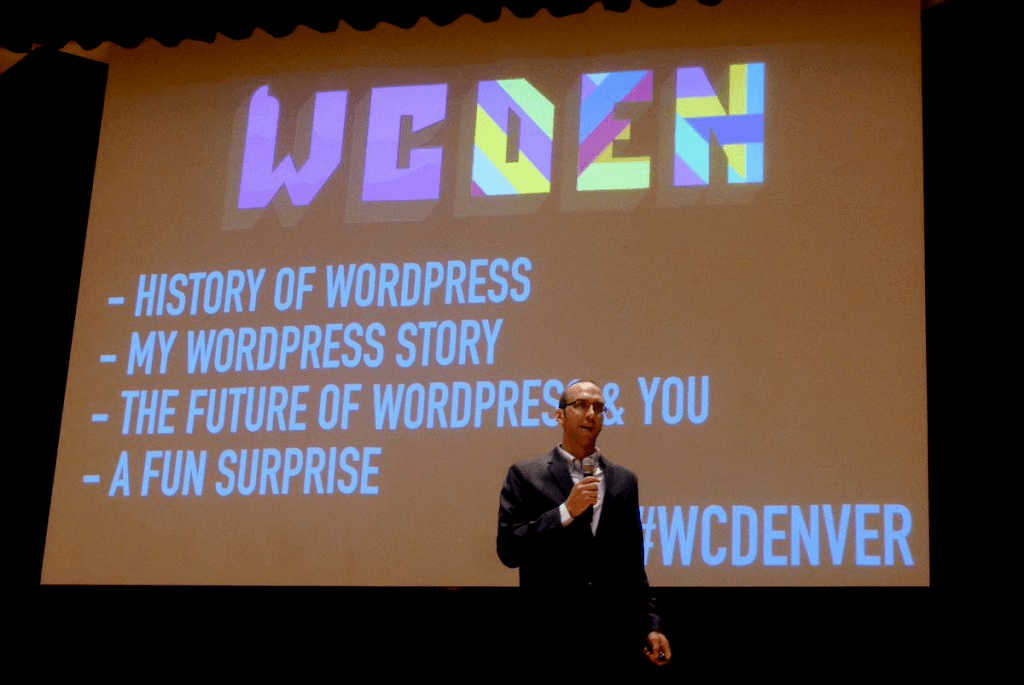 The first day of the event was an early one. All of the organizers headed to the venue well ahead of the event to assist with setup and eventually, registration.

There’s not much to report back about day of besides the fact that it was a blur. As an organizer, I found it hard to sit in on sessions, knowing so much was going on around me. Compared to the other two WordCamp events I had attended, I didn’t actually consume much of the content. In retrospect, this was a bit of a shame, as I knew firsthand through the speaker selection process that we had a lot of awesome talks in progress around me!

One of my favorite parts of the day revolved around this video from the keynote. “Do the WordPress Wiggle” is now permanently stuck in my head.

Luckily, all of our talks were recorded for WordPress.tv. I think this is standard for all WordCamps, in fact, here’s a video from Pagely’s CEO speaking at WordCamp Europe earlier this summer. I’ll definitely be checking back in on these sessions once they’re uploaded! From what I can tell from the reactions of event attendees, we did a good job of selecting high-quality people and topics.

If you’re interested in how the event was setup, we essentially had two tracks, and two rooms- one for each track. In between the rooms was a long hallway where we strategically placed our sponsors. Inevitably, attendees would interact with sponsors in between sessions and tracks. Setup ultimately depends on the venue and the rooms you negotiate, but it was nice to feature the sponsors, instead of hiding them away in a room. I think they definitely appreciated that.

Many WordCamps give attendees a piece of swag, and ours was a water-resistant picnic blanket with our logo. These ended up coming in handy, as there was little lunch seating inside, and it was a beautiful day outside. Most attendees took to the lawn of our venue and cozied up with people they met in their sessions. It couldn’t have worked out better. 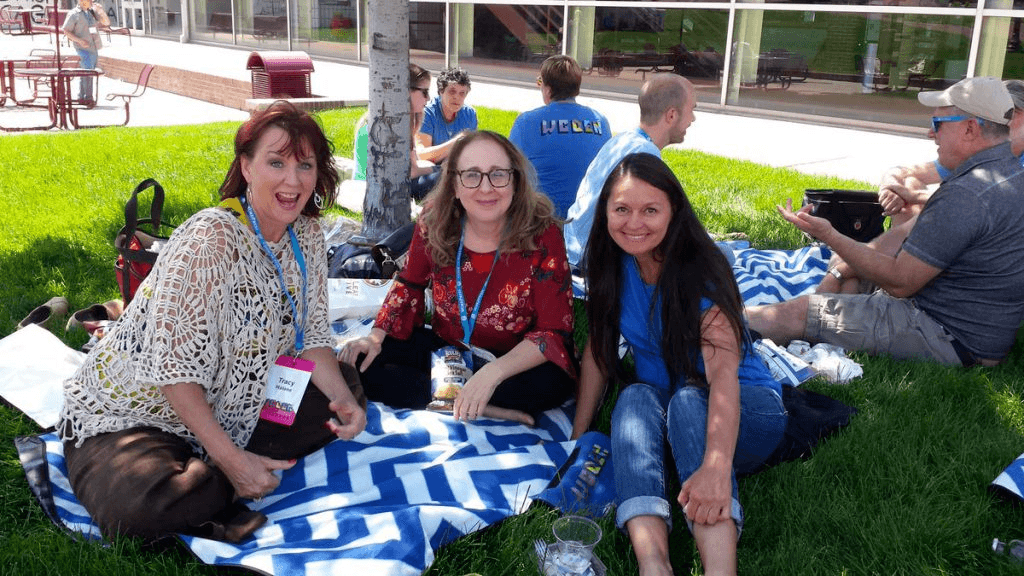 The day wrapped up before we knew it, but the event wasn’t over yet. After a brief break (and nap for me), I headed to the after party. I think it’s events like these, after the speaking sessions are over, that really allow you to ingrain yourself in the community, and make connections that last. Maybe it’s the alcohol, but it’s also the opportunity to de-stress and wrap up a great day. Don’t miss your WordCamp’s afterparty! Just don’t drink too much, as most of the time, the after-party happens before WordCamp is officially wrapped. 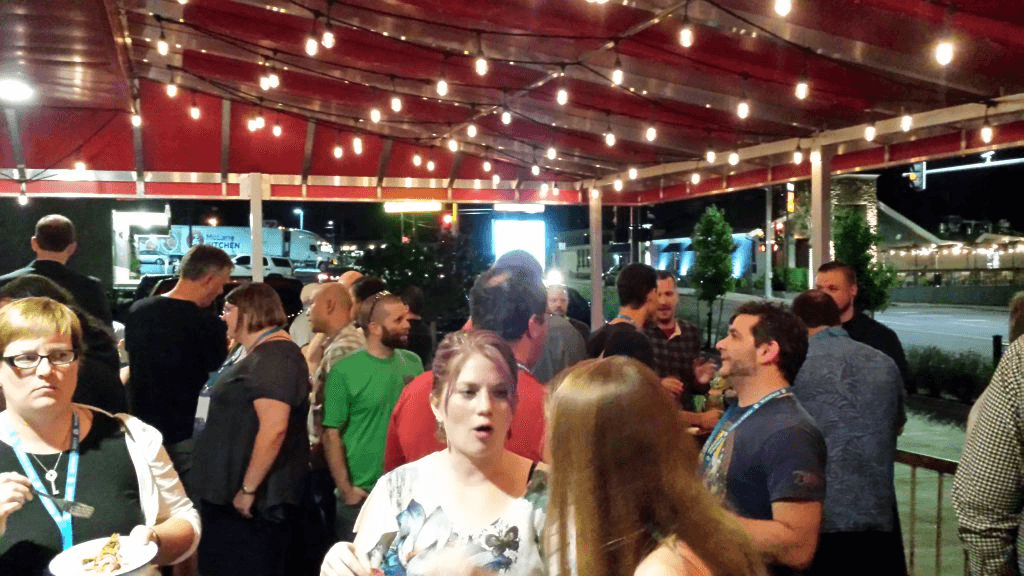 The second day of WordCamp was devoted to workshops, or small groups focused on very specific topics. It was a completely different setup (and building!) than the main event, but it definitely was a highlight of the weekend. We had at least 10 different workshops going on simultaneously, and attendees left with a new set of knowledge, based on the workshop they decided to attend. 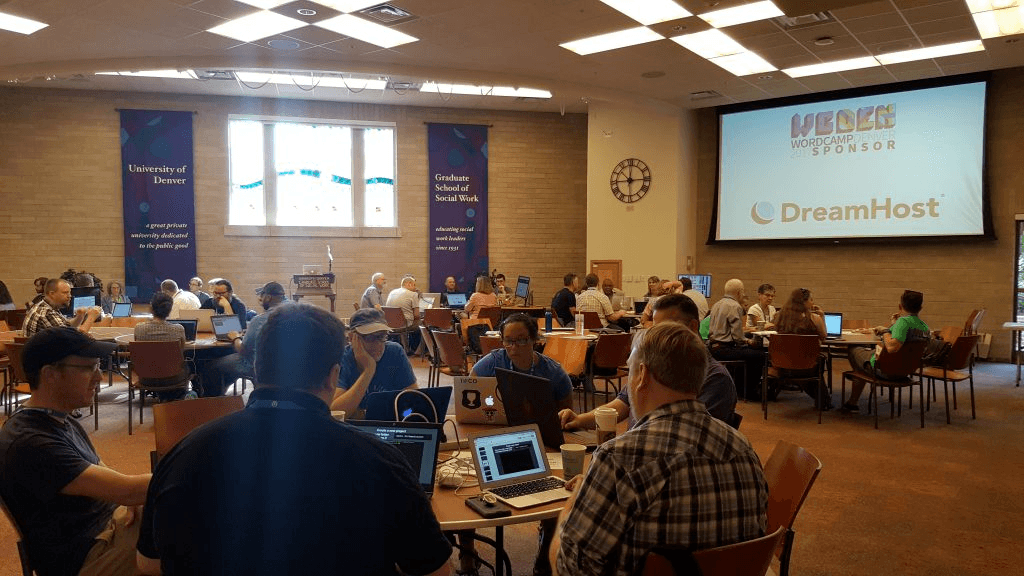 After the workshops, the organizing team headed out to a late lunch to debrief the entire event. After a few hours racking our brains for the most important takeaways, WordCamp Denver was officially over. I headed back home for a nap, and even after that, it was definitely hard to get back to work the next day!

WordCamp Denver From an Organizer’s Perspective

If you’ve been to a WordCamp before, you have a good idea of just how awesome these events truly are. Once you take on a role as a speaker or organizer, you get a unique insight as to how these volunteer-led events really come together. I wouldn’t trade it for the world, but I’m ready for a break until the next one!

If you’ve ever helped to organize a WordCamp event, what were some of your biggest takeaways? Leave your thoughts in the comments below, or tweet at @Pagely.