Pagely is thrilled to announce our partnership with Object Cache Pro. Utilizing state of the art compression technology, Object Cache Pro is now part of Pagelyās core offering, and available to all of our customers, platform wide.

Offering major cost savings, access to some of the worldās best technology, and a dedicated DevOps team to personalize your setup, Pagely customers can look forward to continued scale and growth, with no hosting friction.

A first of its kind partnership, Pagely is proud to help fund innovation in this WordPress space by investing part of our budget into working alongside the fantastic team at Object Cache Pro.

Weāve already seen great gains with Object Cache Pro and our customers can look forward to more in the future! 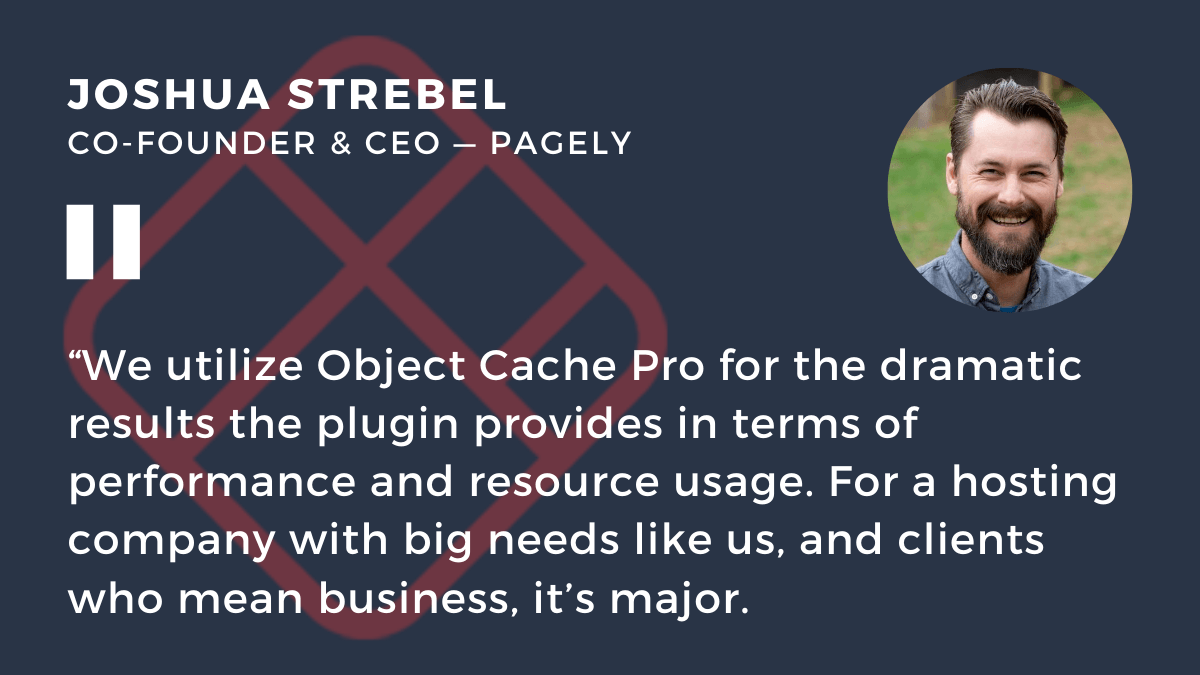 Before Object Cache Pro, we faced two challenges with sites making use of an object cache – CPU overhead and network saturation.

The underlying technologies in Object Cache Pro solved both of these problems for us, translating to less money spent on server hardware and fewer situations where the (quite generous) AWS network limits are reached.

With Object Cache Pro’s state of the art technology utilizing the Zstandard compression library from Facebook, without a lot of CPU overhead, compression is now done at the extension level, talking to and from Redis. This means less hardware, lower costs, and a better experience for our customers.

Aside from supporting an efficient compression algorithm (zstd), Object Cache Pro also uses the igbinary serializer which is a drop-in replacement for the standard serializer in PHP. This works about twice as fast at serializing and unserializing data.Ā  Additionally, the data footprint is smaller when using igbinary and that translates into less memory being used by the underlying Redis service.

We also found an in-depth comparison on igbinary vs other serializers on Blobfolio that you may also enjoy reading if you’re into this kinda stuff:Ā https://blobfolio.com/2017/03/benchmark-php7-serialization/

With a wide selection of Redis plugins available in the WordPress marketplace, Object Cache Pro was the obvious choice for us not only because of their forward-thinking tech but also because of the dependability we have come to expect and appreciate from their brilliant team.

All of this aside, Object Cache Pro is unrivaled when it comes to bug fixing, an extent to which is a rarity across opensource software. Thereās a saying in the opensource community that goes, āthereās a lot of eyes so all the bugs get fixed.ā But, more what we see concentrated use of the software by lots of users leading to fewer bug fixes for fear of breaking one usersā site. That, and, no one owns the codebase, so less can get addressed in a timely manner. Similarly, we are continuously impressed by their coverage of testing, fully unit tested with 100% code coverage.

Further, switching over to Object Cache Pro gives Pagely customers access to our commercial relationship with their team, which means any problems our customers see are fixed within a few days.Ā  You benefit from our relationship.

Fewer bugs in the caching layer and full unit testing is a good thing, and thatās something we stand behind.

So, Whatās in it for the Pagely Customer?

We are the first premium host to achieve this level of partnership with one of the best technology companies in WordPress. Through our relationship with Object Cache Pro, every single Pagely customer benefits from the work weāve done to secure that.

But real talk, whatās in it for you?

Major cost savings.
Even when it means less revenue for Pagely, weāre constantly looking out for cost savings for our customers. By decreasing our dependency on more hardware, you see the savings directly on your bill.

Access to a premium partner.
Since youāre at a premium hosting provider, you automatically get access to the partnerships weāve developed. What’s more? You donāt pay an extra licensing fee.

The best tech, baked into your Pagely account.
Weāre always on the hunt for the best and most innovative technology for you. With no effort on your part, we do the legwork of implementing this tech across our technology stack. All you do is benefit from it.

Bigger performance wins possible with a little extra code work.
WordPress has a feature called Transients. It’s a way to store the result of a complex query or a long-running remote API call temporarily in order to make subsequent lookups for that data return a lot faster without doing the same expensive operation again. Normally without any object cache, transients are stored in the WordPress database’s wp_options table. When using an object cache, it is stored in memory. Adding a few extra lines to your code allows you to tap into the power of this API for incredible performance gains. Having an efficient object cache utilizing fast compression and serialization only increases those gains.

A dedicated DevOps team.
While others might catch on and jump on the bandwagon of partnerships like this, Pagely still stands above the rest in meaningful ways that translate to real gains for you, the customer. Our DevOps staff becomes your dedicated, in-house team. Our engineers handle all the setup and optimization to make sure your usage of Redis is optimized specifically based on your exact circumstances and needs. Other hosts donāt do that!

When you partner with Pagely for your WordPress hosting at scale, you know you have selected the most forward-looking host driven by advances in technology, cost savings for you, and tangible outcomes that help your business thrive. 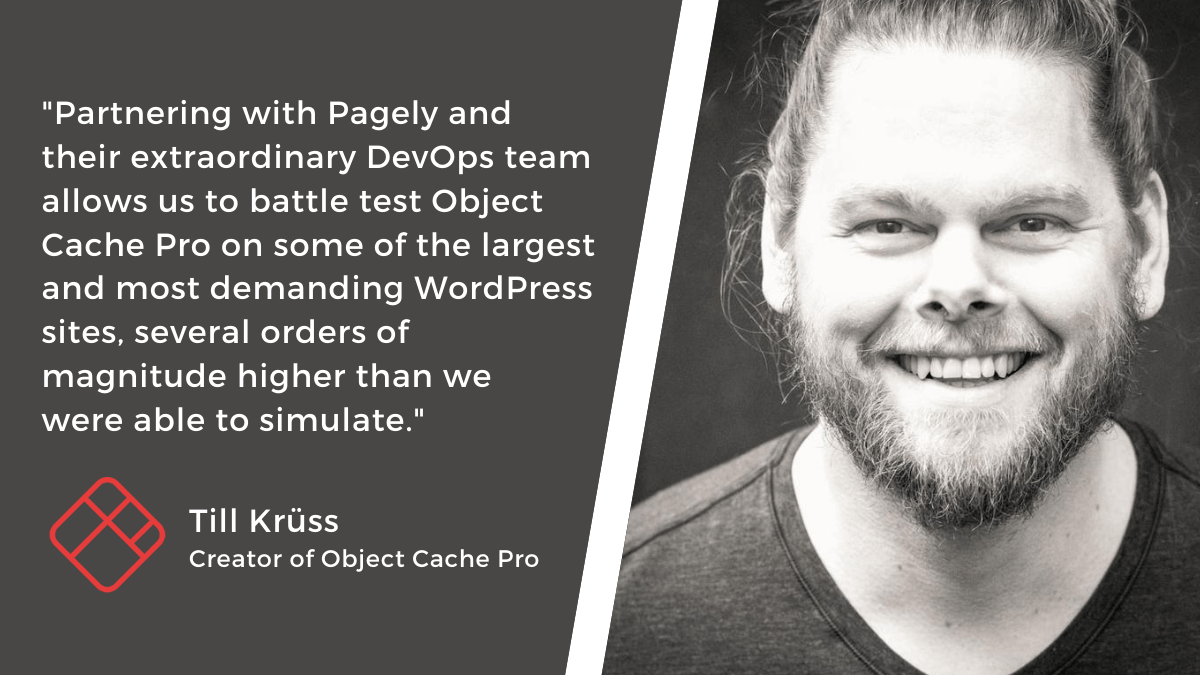 So letās get to a real-life example here. One of the first Pagely customers we switched over to Object Cache Pro was FanSided.

FanSided comprises a massive network of over 300 active websites and needed a fast solution to maxing out servers and using way too much CPU. Pagely found that solution in Object Cache Pro and implemented it with no effort on FanSidedās part to completely eliminate those issues.

The proof is in the data, and here you can see dramatic drops in CPU usage after Object Cache Pro was implemented, as well as servers being maxed-out-no-more after the switch.

Read the full FanSided + Object Cache Pro case study here, and take it from our CEO:

āIn the vacuum of 1 website, a small performance gain is useful. At our scale of hosting, processing hundreds of billions of requests per month across thousands of AWS EC2 instances, a small performance gain to each site means a real and quantifiable benefit to our customers and our bottom line.
Now what if that performance gain was not so small, but major.Ā We sought out and partnered with Object Cache Pro after seeing the dramatic results in terms of performance and resource usage when testing. We have thus deployed their Enterprise solution fleet wide and the results speak for themselves.ā