It Sort of worked.

We created a few ads with various tag lines. We attempted witty, we attempted straightforward and we attempted the absurd. In terms of raw number of engagements, the dumbest ad you could probably think of did the best.

Is it a dress shoe? A dance shoe? An ass-kicking shoe? It is whatever kind of shoe you want it to be. But all it was is a promoted tweet of a photo of a shoe. Thanks go to Death to Stock Photo for such an amazing shoe. 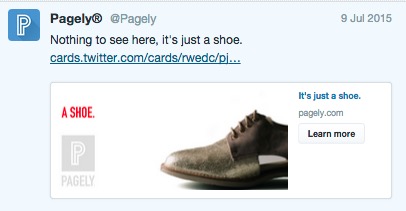 The CPC for this promoted tweet was slightly higher than the other’s we tested but the raw number of clicks it drove was 3x the nearest. Why on earth would folks respond to this idiotic promoted tweet? Perhaps people are just so tired of ads, that the novelty of an anti-ad worked. If you are curious where the link in the promoted tweet landed, it was here. A landing page for 10 challenges the Enterprise faces adopting WordPress.

The second best performing tweet was an attempt at being witty. Thundercloud is a name I lifted from a children’s book I read to my 3yr old son a few times a week. (Thundercloud is a hamster in this book). The aim here was to be funny, and appeal to the internet’s affinity of “AWH”. Who doesn’t like dogs? It did pretty well and actually had a lower CPC then the shoe, but for whatever reason the twitter algorithm decided the shoe was worthy and gave the shoe 2x the impressions likely rewarding the nearly 2x CTR of poor Thundercloud. 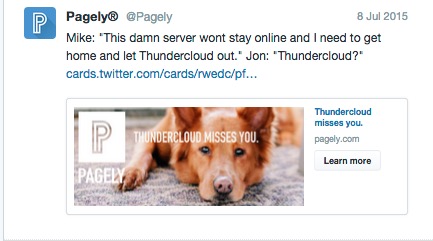 I actually consider the test a success as we drove 650 clicks to the website at a $2.31 CPC which is about $20 cheaper PER CLICK then Google PPC. Yes this traffic is not as targeted and the conversion data shoes shows that this traffic is less likely to become a customer. However we further segmented this promoted tweet traffic with a retargeting campaign and the early data shows the user is coming back and spending additional time on our site.

Experiments prove or disprove a hypothesis. In this case it proved to me that twitter users like shoes.

Campaign data below for the top 3 ads from this test. 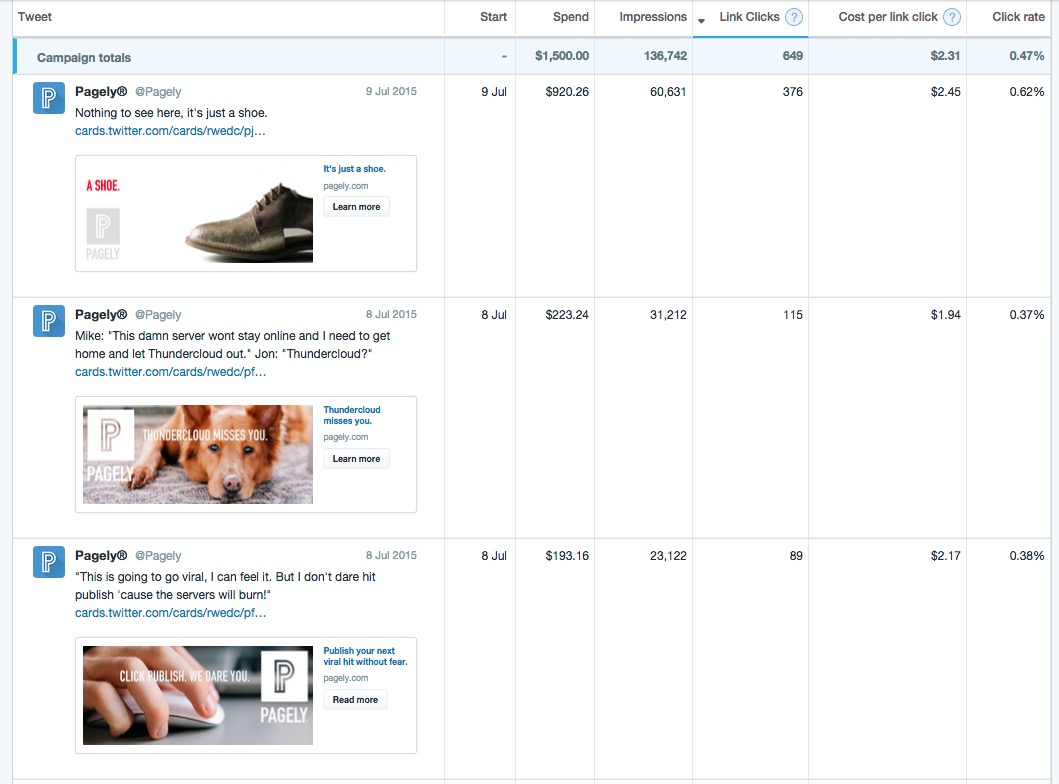